The start of the 2019 academic year marks a complete overhaul of the baccalaureate, designed to improve pupils' chances of success in higher education. The new baccalaureate is fairer and focuses more on developing pupils' regular work.

The start of the 2019 school year features a total overhaul of the baccalauréat, so that pupils are more successful in their higher studies given that 60 % do not manage to obtain a degree in three years.

This reform is the result of consultations by Pierre Mathiot and then by all union organisations and 40,000 upper secondary school pupils.

The new baccalauréat, with one part assessed on coursework, is fairer and promotes regular work by pupils to a greater extent.

The start of the 2019 school year features Grade 10 and 11 classes arranged differently, the entry into force of new programmes and starting coursework assessment for Grade 11 pupils.

In the new upper secondary school, pupils take a broad series of common classes intended to pass on a general 21st century culture based on sciences, humanities and fluency in two living languages.

A positioning test at the start of Grade 11 is a chance for pupils to assess their fluency in French and their skills in maths. Teachers will use the results of this test as a basis for consolidating the knowledge acquired by pupils in one-to-one support.

In the technological pathway, pupils henceforth have a common thread in all streams. Three specialist subjects in Grade 11 and two in Grade 12 specific to each stream are added.

Grade 11 general pupils will have chosen three specialist classes of four hours at the end of last year. This learning logic encourages pupils to work harder in upper secondary school which will make them successful in their higher studies.

Grade 11 pupils on pathways closest to their desires

The families chosen for the start of the 2019 school year demonstrates that the pupils have made full use of their new freedom. 47.7 % of them have made choices that were not previously available.

Only 26 % of pupils have chosen combined "maths" (the most chosen speciality - 64 % of pupils), "physics and chemistry" and "Earth and life sciences", i.e. the equivalent of the former S stream.

A vast majority of pupils have opted for diversity, with, for example :

A baccalauréat that promotes regular work

From the start of the school year, the results achieved by Grade 11 pupils start to count towards their baccalauréat :

At the end of Grade 11, like today, pupils will take early French exams.

In Grade 12, the pupils will supplement these results by :

The exam encourages regular work by pupils during the Grade 11 and 12 years, so that they can broaden the disciplines that fuel their project to continue with their studies.

How are the common exams organised ?

Exams last two hours at most so that they can be arranged during class times to avoid disrupting the life of upper secondary schools. They do not necessarily take place in the same week.

To ensure the national nature of the exam, the subjects are drawn from a common test bank. The answer sheets will be made anonymous and will not be corrected by the pupils' teachers.

Range of specialities in establishments 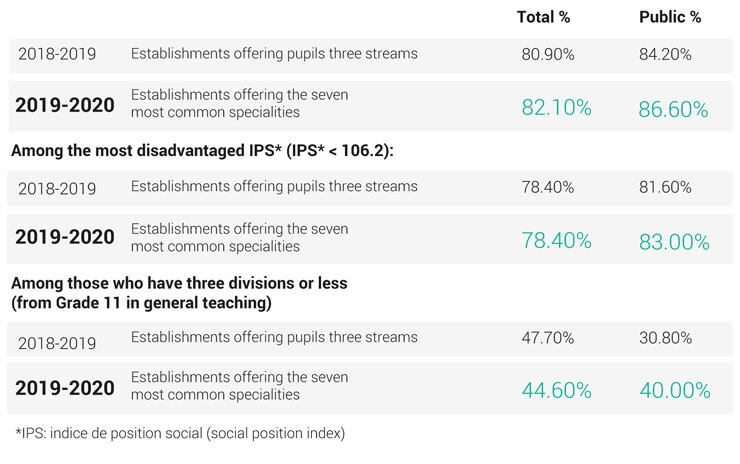 Final oral exam
This new exam taken at the end of Grade 12 is designed to allow pupils to develop a skill that is essential to their personal and professional life.
Prepared in Grade 12, the final oral exam is in reality the culmination of a pathway that commenced in primary school.

The exam takes twenty minutes and covers a project based on chosen specialist subjects. The aim is for the pupil to be able to express themselves as an individual, why they are affected by what they are talking about, what interests them, what catches their view of the world and to state how the subject is part of their higher education project.
Jean-Michel Blanquer, Minister of National Education and Youth, asked Cyril Delhay for a report on teaching oral skills. The report: Faire du grand oral un levier de l'égalité des chances (Make the oral a lever for equal opportunities) was submitted on 24 June 2019. A consultation is being undertaken with the social partners on this basis at the start of this year. 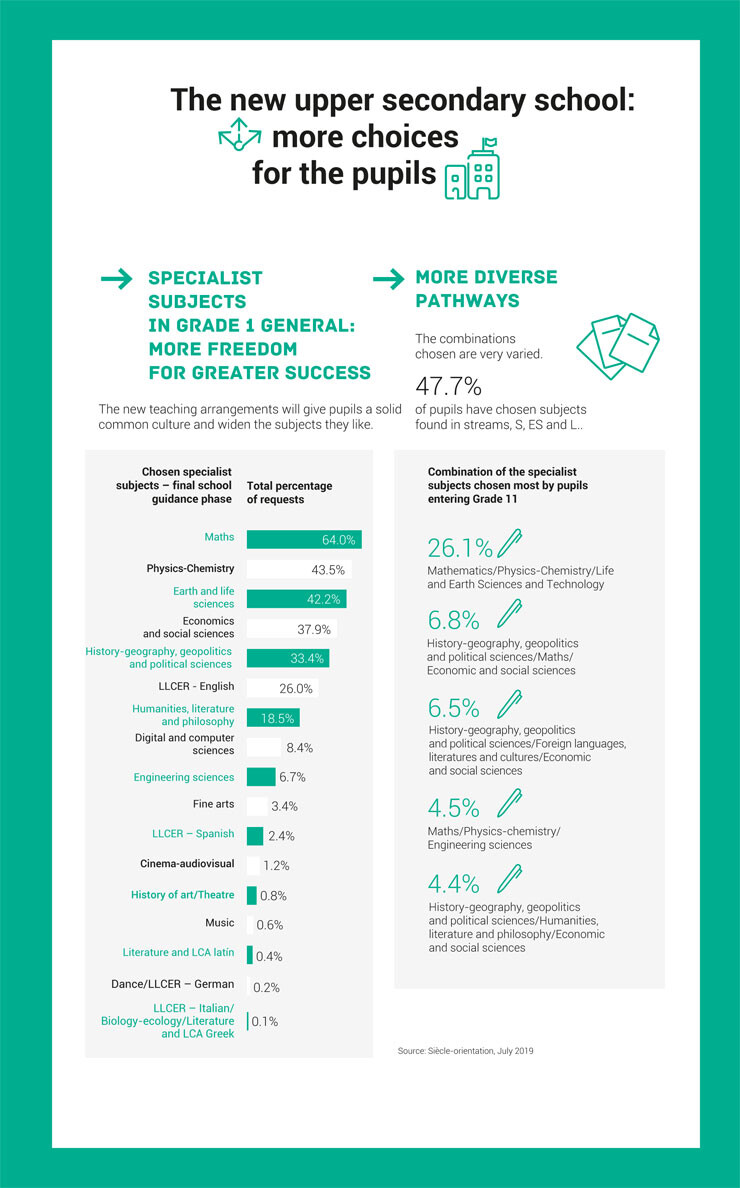 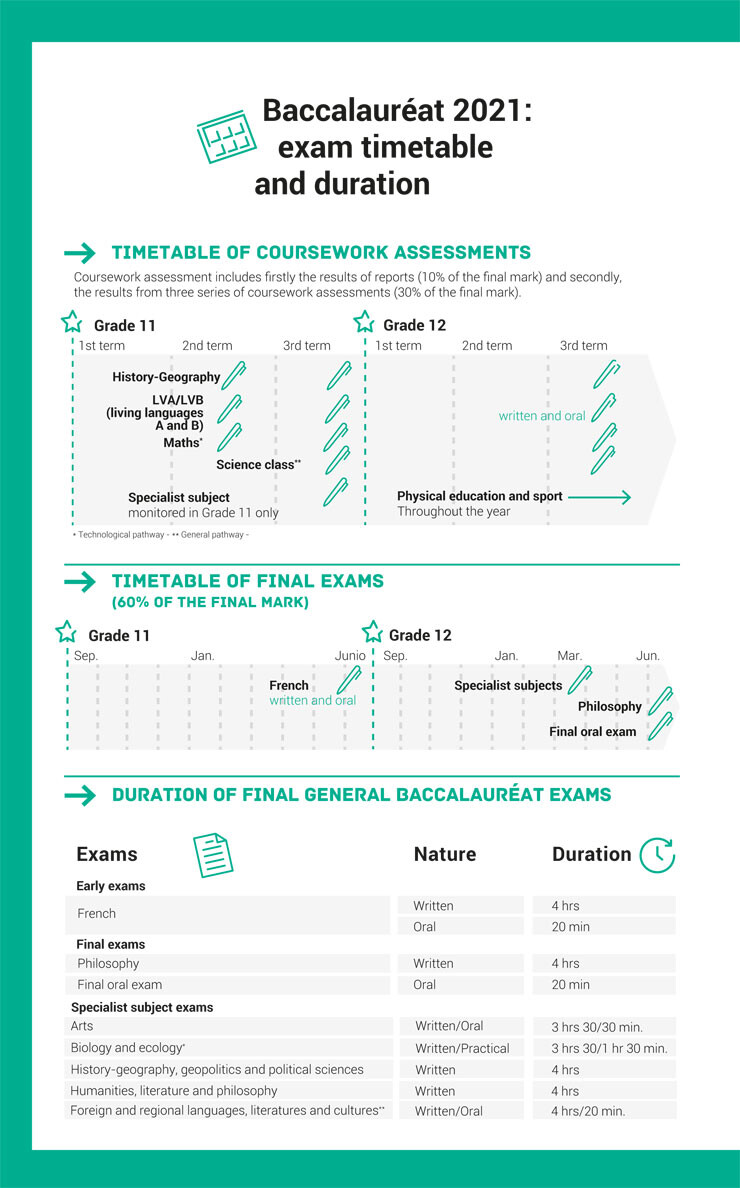 Together for a School of Trust
Pre-primary school at three years old for all
Grade 1 and Grade 2 classes with twelve pupils : 300,000 children involved
Grade 1 and Grade 2 assessments to anticipate learning difficulties
Annual benchmarks in primary and lower secondary school to guide pupil progress better
Consolidate primary school in all regions
Support the most vulnerable families
Provide better facilities for disabled pupils
Homework done : work towards success of all pupils
Culture and arts at the heart of the school system
Mobilisation for Paris 2024 : boost sport at School
Guide pupils better and lead them to success
Stronger vocational pathway
Upper secondary general or technological school : new Grade 10 and Grade 11 classes
New dynamics for living languages through all school levels
Digital learning aids
A School at the forefront of ecological transition
The principle of secularism at the heart of School and the society of trust
The School of respect for others
Develop the culture of engagement : the UN system and the civic service
Boost initial teacher training
Support personnel throughout their career
Improve labour conditions for staff
Involve families better in School life
Wednesday plan and education cities : enhance out-of-school times
An ambitious boarding school policy serving pupils and territories
100 % success in primary school : strengthening French and mathematics instruction
Opening French schools to Europe and the world
Banning the use of cellphones in primary and lower secondary schools
Supporting books and reading
Enriching the lower secondary school curriculum
Promoting a culture of innovation 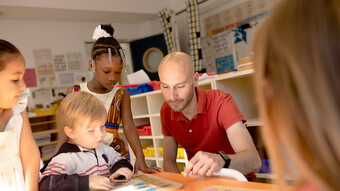 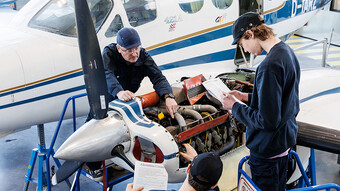 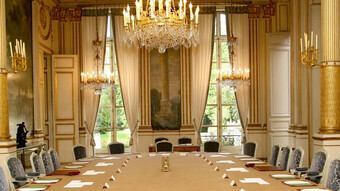