For a School of Trust

The School of Trust is based on the respect of three pillars : the core values of the French Republic, the research of excellence and benevolence.

Jean-Michel Blanquer has been the French Minister of National Education and Youth since May 2017. From 2009 to 2012, he served as director of ESSEC business school and previously held several positions of responsibility in the French education system, including rector of the Guyana and Créteil academies, and director general of school education. He has a doctorate in law from Panthéon-Assas University and an M.A. in politics from the Paris Institute of Political Studies (Sciences Po). He has been heavily involved in relations with Latin America, notably as president of the Institute of the Americas and director of the Institute of Latin American Studies at the New Sorbonne University. 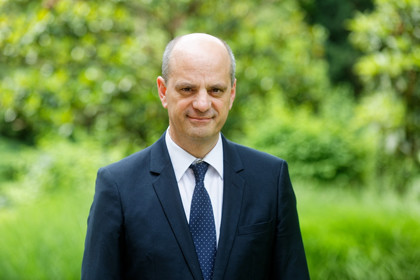 Pre-primary school at three years old for all

Thanks to the Loi pour une école de la confiance (School of Trust Law), starting this academic year, the compulsory education age has been lowered to three.

For the 2019 academic year, primary school Grade 1 and Grade 2 classes have been divided into Rep and Rep+ (educational priority networks). This will also apply to priority education classes in the final year of preschool from the 2020 academic year.

To ensure all pupils master basic knowledge, it is essential to meet their needs from the early years of education. Assessments have therefore been introduced in French and Mathematics and resources have been provided to teachers to help pupils make progress in the areas they find most difficult

Nearly one third of schools and educational establishments are organised into local inclusive support units (PIAL). These units mean that families do not have to wait for a support worker, instead the support worker receives the families.

The new vocational secondary school aims to respond to the new demand for skills, specifically in terms of ecological and digital transition, and to reinforce the appeal of vocational education. In addition, a new generation of Campuses offering vocational activities and qualifications will guarantee vocational excellence in every region of the country.

The start of the 2019 academic year marks a complete overhaul of the baccalaureate, designed to improve pupils' chances of success in higher education. The new baccalaureate is fairer and focuses more on developing pupils' regular work.

A School at the forefront of ecological transition

Girls and boys on the path to equality, from school to higher education

In celebration of International Women's Day on 8 March, "Girls and boys on the path to equality, from school to higher education" is a collection of statistical information on the success of girls compared to boys, starting from school right up until entering active employment.

These key figures give an overview of the French educational system for the school year 2017-2018.

The state of Education 2016 : 30 indicators of the French education system

This edition brings together the key statistical indicators to analyse the French education system and assess the policies implemented. Structured around the resources allocated to the School, enrolment conditions and student outcomes, it focuses on describing the main current trends and sheds light on international comparisons.

Although International data are often referred to in the public debate, they are often no less tricky to interpret. Education in Europe: Key figures presents a wide variety of indicators through 30 factsheets including texts, focus, graphs, tables and maps.

The French school system was founded on general principles that were inspired by the 1789 revolution, and have been added to and have taken shape with a set of law texts from the 19th century to the present day.